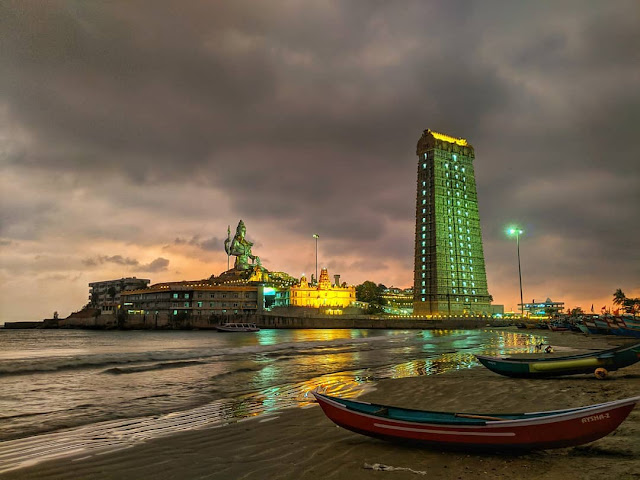 The statue of Lord Shiva is the second biggest statue of Lord Shiva in the world after the Kailashnath Mahadev Statue in Nepal. The statue is 123 feet in height and took about two years to build. The statue was built by Shivamogga’s Kashinath, approximately Rs 50 million rupees were spent on this statue to built, financed by Mr. R.N. Shetty. The place is surrounded by sea on three sides which enhance the beauty of the statue. The sunset behind this statue is a marvelous sight everyone should see.

Murudeshwar Beach is a beautiful beach, it's situated near Murudeshwar Temple. This beautiful beach is situated just beside Lord Shiva Temple.its a perfect place to spend time after visiting the temple, There are many rides available at the beach. Speed boat, camel rides are in available in the beach.it is suitable for both family and friends group.

Apsara Konda Falls is a small waterfall located in the Uttara Kannada district of Karnataka.it is located 22km distance from Murudeswar Temple, It is one of the charming places to visit in Murudeshwar.

The waterfalls are nature's beauty..! Its a pleasant and peaceful place.

Just Ignore it when visiting during in Summer season, because in those days waterfall flow was reduced, some times it's going fall to like water drops, so could not enjoy the water.

Mirjan Fort is a beautiful fort located in the village of Mirjan on the Uttara Kannada district in Karnataka it is Situated 57 km from Murudeswar,28km from Gokarna.Mirjan fort is one of the best tourist palces in Murudeshwar

The fort known for its architectural elegance was the location of various battles in the past. It is about 0.5 km from the National Highway 66, The architecture of wells is awesome.there is a separate tier in the middle of the fort. Currently, the fort is being restored by Archaeological Survey of India (ASI).

Netrani Island is a tiny island in the Arabian Sea which is famous for scuba diving/snorkeling. It is approximately 10 nautical miles from the temple town of Murudeshwar. Views from above this island is appearance look like heart-shape. It is one of the very few places for snorkeling in Karnataka. It is also one of the top places to visit in Murudeshwar, especially, whoever wants to do adventures things, they love effectively in this place.

The island is accessible by boat from Bhatkal and also fromHonnavar.

Idagunji Ganapati Temple is one of the famous temples and the popular places to visit near Murudeshwar.it is located 19km distance from Murudeshwar. The temple is popular as a religious place. this temple has created a record about 1 million devotees visiting it annually. which is also popularly called the “Ganesha Coast”. Lord Vinayaka can be seen in standing posture at this temple.

Vinayaka Chathurthi is one of the major festival celebrated here. Idagunji can be reached by bus from Honavar.